Went for a quick game this morning at Petes place, my first encounter with Skaven so knew it was going to be a fun learning curve. I had a little idea about how they played, I had heard the A Bomb was nasty, lots of random effects, nasty warmachines and cheap troops. The last one in particular I was familiar with at least.

We rolled battle for the pass and hell's no we rolled again and got blood and glory. I like B&G because I have a ton of banners now in units I don't need to get in the front lines. 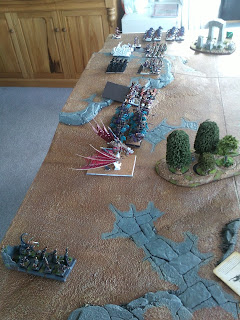 Pete had (from memory)
3 big blocks of slaves, clanrats with screaming bell, 2 units of gutter runners, hellpit abomination, doomwheel, warp lightning cannon and plague catapult, a unit of stormvermin and heaps of little characters all over the place. 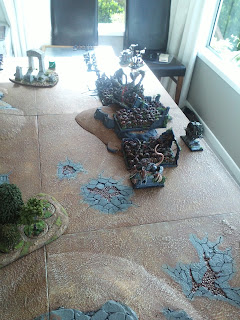 I don't have many pictures as the battle was rather enthralling.

Pete took first turn and with shooting annihilated both dire wolf units down to the single doom wolf, and took the terrorgheist to 3 wounds. The warp lightning cannon got a flank shot (silly Ryan!) down my knight bus killing 5 or 6 and hitting the terrorgheist also! Thankfully I pulled out a timely 6 for my regen save. His doomwheel decided to shoot his own HPA but rolled a misfire, then got extra D6" movement as his "penalty". Magic only really hit the knights down a few more models, leaving me with only 5 BK before I moved!

In my turn Pete popped the banner of you can't fly or shoot very well, only affected my terrorghiest but that was enough. The storm drowned out his scream at the unit of gutter runners next to him who were peppering him with darts. I charged my knights into some skavenslaves to stop them getting shot, moved cautiously back with zombies and single dog caused an engineer to run from a charge. Magic was ineffectual but did draw the dispel scroll.

Turn 2 was me grinding down the slave block with knights, and chasing a whole unit of slaves down with 20 zombies as they only fleed 2". Omnomnom. My terrorgheist beat up the gutter runners that charged him thanks to no poisons and an impressive thunderstomp. A convenient plague catapult misfired over my knights and I got to place it over the slaves, enabling me to quickly take the unit down.

Turn 3 I reformed my knights and  charged the screaming bell unit, got an epic magic phase giving me 5 knights back and a fully healed terrorgheist. Meanwhile my varghulfs were getting tons of poison shots and making tons of regen saves, chasing a unit of gutter runners down then heading for the warmachines. My vampire hero chewed through several skaven heroes that were thrown under the bus, and when he finally got a change to smash the grey seer he did one wound total, his horse did another, then he drank his potion of get all wounds back. So that's what that feels like from the other side.

And then then below happened. 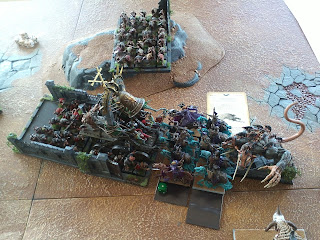 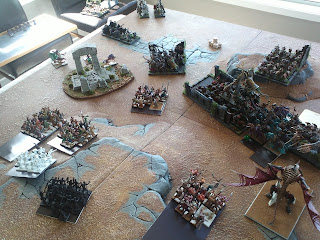 I had a plan though, survive one round and then scream at the hellpit then finish him off with vampire lord. I did survive the first round, smacking lots of slaves up with the Lord to only lose combat by 1. Unfortunately in my turn the scream rolled a 3 on two dice and did one wound, and the vampire lord only made 1 wound on the hellpit thanks to an impressive 4 passed regen rolls by Pete. My vampire hero was still flailing around trying to beat the grey seer and failing. I lost combat really badly and the whole unit crumbled. 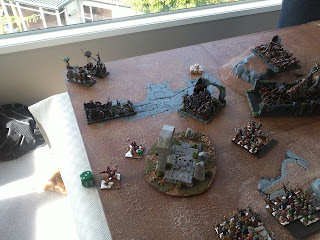 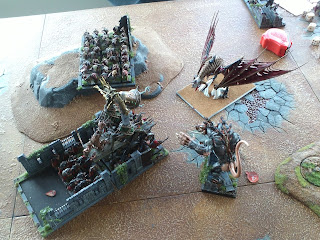 Hmmm. To complete the devastation a plague spell on one block of zombies in the next turn jumped into my necromancers unit and he failed his toughness test, 2 crumbles left me with a few dozen oblivious zombies and a single varghulf running into the distance to save some points. 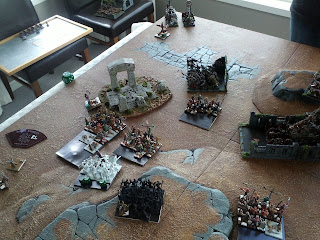 All in all not bad. Learnt a lot and I did feel pretty confident at the bottom of turn 3. Pete mentioned the zombies clogging up the left flank was great, and the terrorgheist did well initially taken a warp lightning cannon hit then getting the gutter runners and doomwheel, but he let me down at the crucial point. Also as was pointed out to me I should of had the necro with ruby ring on the right flank throwing flames at the hellpit as soon as he emerged, would of made quite a difference. My level 1 death rolled aspect of the dreadknight, switched to spirit leach but never got the change to try it out.

Skaven are fun! Looking forward to the next match.