Don't fear the Reaper...  well maybe you should.

This coming weekend has Call to Arms in Wellington.  It is the first local 8th ed 40k tournament and I am very much looking forward to it.

I have played four games of 8th edition and really like how it flows.  Trialling a few of the Eldar units in the new system and trying to predict what might be played has resulted in the following list.

That is it.  The nice thing with transports being able to multiple units now is that all the Reapers and characters can share the same ride!

The list also gets me painting some Dark Reapers after years of owning them, I will share some photos of them once they are finished.
Posted by Wryth at 4:00 PM 2 comments:

Back in Your Pine Box

Yesterday in Wellington we held a Malifaux tournament, 3 rounds and 14 players. Results are below.

Congratulations to all that attended!

For myself, I had three excellent games. First up versus Val with his gun-slinging/bandit Outcasts, secondly versus Greg with magic/trickster Ten Thunders, and finally James with reporter based Guild. 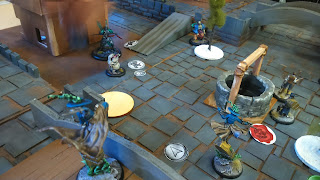 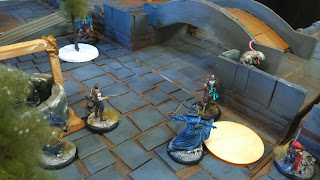 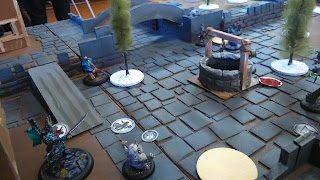 Earlier in the year our group decided to set a painting target of at least 50 ss Malifaux to be completed by the end of April. We each brought our armies together last night and had a mini photoshoot - enjoy some photos below.

This weekend we will all be playing in our first Malifaux tournament here in Wellington with 14 players total - exciting times :) 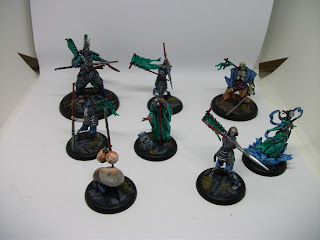 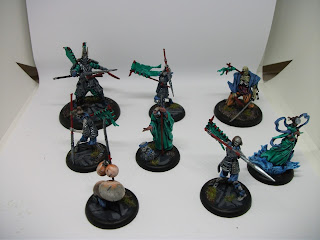 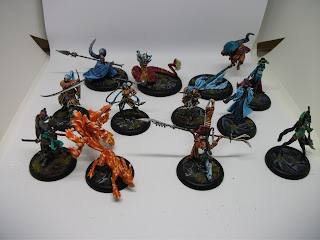 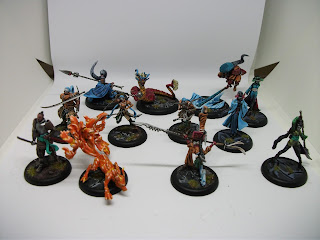 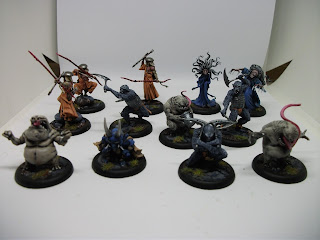 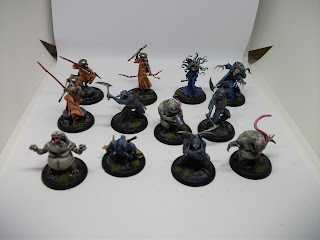 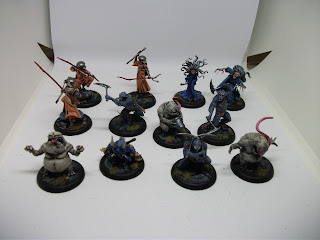 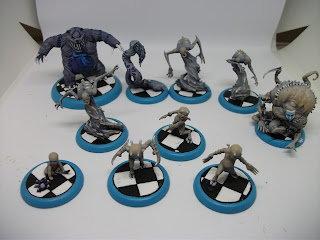 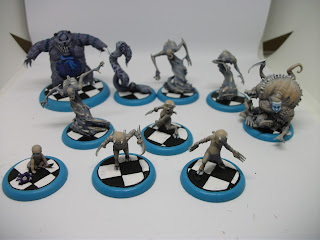 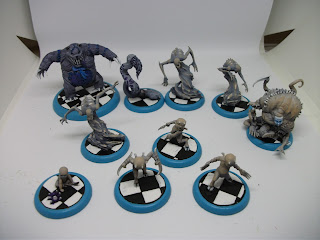 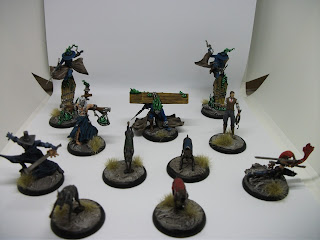 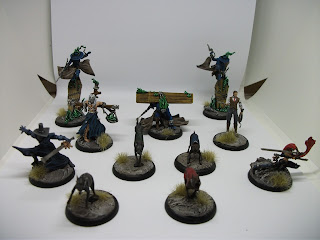 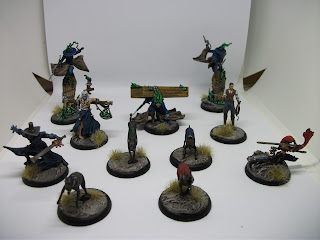 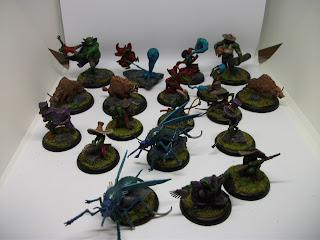 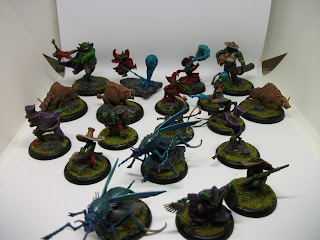 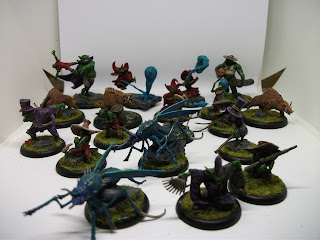 When I moved into WHFB several years ago, something I ventured into was magnetic basing.

Tired of knocking over 40 skeletons and having to re rank them, packing up 200+ models before and after a game, and trying to transport them, I knew I had to change something.

I went through a few iterations of different methods before I settled on the current process. Thankfully playing Infinity and Malifaux means fewer models to complete but is still working well.

First I grab a model, like this nice shiny new bashi bazouks 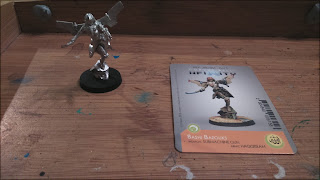 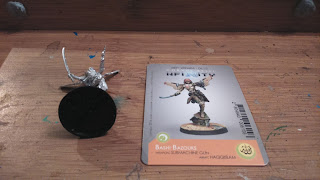  
Grab out some super glue and spak filler, along with your magnet of choice. I find 5mm x 1mm a good size for 25mm based metal models, or 30mm based plastics. 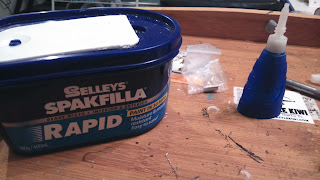 Fill the base with some spak filler. 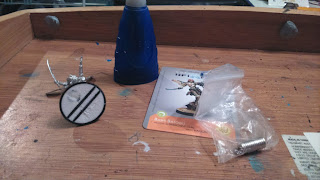 Place a magnet on whatever board you are working on, then add a drop of super glue 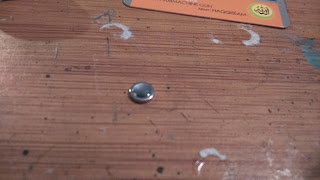 Press the model onto the magnet. 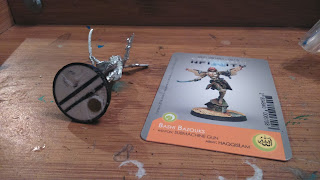 Check the base is flush afterwards and leave for a good 12 hours to set. Then you can transport your models on any metal surface (like an oven tray) inside any suitable container (sistema is awesome)

The Fate of Decks and Another Battle

Many members of our group have been buying the various official fate decks made by wyrd recently. The results have mostly been disappointing. The "Classic Fate Deck" has different shades of colour on the back of the cards, which is a really bad thing when your cards in hand could potentially be inferred without seeing the front. The "Arcane Fate Deck" is really hard to figure out which suit the card you are holding is, which only slows things down.

I think I got lucky when I picked the "Seriously Twisted Fate Deck" - the number and suit is clear, and the backs are consistent, and the well made box with magnetic lid leaves room to bring cards for schemes/strategies/stat cards as you wish. 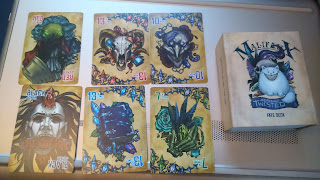 In other news, got another match in yesterday. This was my Guild versus Wil's Gremlins using GG 2017. Strategy was same as last time, secure the stash. We both took claim jump and I took inspection while Wil took leave your mark. Of course I didn't know this yet...

Deployment was spread out for the Guild, concentrated for the Gremlins

The Guild moved up the middle and right, the Gremlins re positioned to my right, but both pretty cautiously.

Justice went on a murder rampage against the smaller Gremlins, hoping to reduce the numbers disparity. I stayed away from Mancha as he has the magic armour thingy. Ironically I later found out Mancha was worried I had taken a quick murder scheme so was playing cautiously also.

The Judge and a marshall held the left flank, not really bothering to push up to get rid of the lone Gremlin left. Just sat there dropping schemes and getting inspection points.

I put points on the board early for claim jump and the strategy, but maxed out the former and my numbers began to tell at the end for the latter. Mancha smashed me out of the centre, though I continued to hold the flanks for inspection, it meant the Judge and Lady Justice couldn't come out and kill more without losing those points.

The Gremlins used late game advantages in numbers to be more aggressive and get points for strategy and the master Wong nipped across the board to pick up further points for leave your mark.

Overall very tight game which ended in a 7-7 draw.

Malifaux and Infinity require a lot of tokens, and I wanted to do this relatively cheaply, so I recently picked up a laminator (NZD40) and got to work.

Corvus Belli (Infinity) provide some fantastic official tokens on their website, I printed off the first few pages from the main rulebook and the silhouette markers. Using some scissors for the latter and a 25mm round hole punch (NZD 5) for the former and I now have an extensive set. 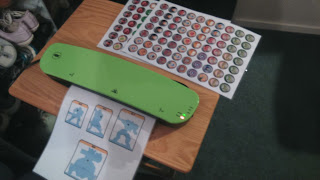 Wyrd (Malifaux) unfortunately doesn't have free official ones and decided to be 30mm based instead. So googling some images, resizing to 3cm by 3cm in word, then printing was the ticket here. I then used scissors and a spare 30mm base (well not spare, had to pop a Death Marshall off temporarily) to cut out a decent circle for each.

I made some faction based scheme counters, shield counters, some positive/negative flip counters and a void counter. 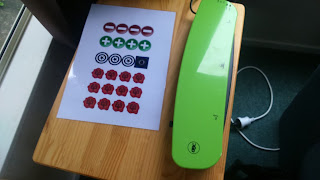 Now I have plenty of counters ready for battle. 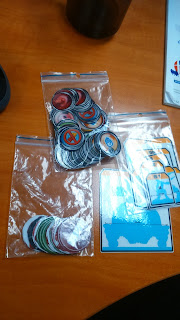 Had my fourth game of Malifaux last night. I used Lady Justice based crew versus Greg with Misaki. 45ss as I am still waiting on some new models. We played five turns across about 2 hours using Gaining Grounds 2017 schemes and strategies. The strategy was protect the loot, so getting non-peons to the centre near 2 50mm markers.

It started with the Guild pushing up both flanks and the Ten Thunders moving up the middle.

The Judge moved out and took all the Torakage firepower with barely a scratch. Which was a shame, as I was hoping he would get me some points for framed for murder scheme.

Misaki was sitting in the middle early but then ran straight at Lady Justice. Feeling like this was a frame for murder, but thinking it would be good to get rid of Misaki early, Justice ripped her to pieces. Unfortunately my hunch was correct and I went down 3 points..

Shots were exchanged in the middle...

The Judge continued to not die, but then the Marshall I need alive for inspection scheme got hit with red joker on the damage flip and died.

Hannah moved up the middle with Misaki gone to be a bully.

Justice and Marshall had this flank well covered, but lots of points just sitting around...

I lost track of taking photos at this point. IIRC the end of the game played out as so...


Failing to pick up framed for murder while Greg picking up max points for this scheme sealed the game. I did manage to table him but only by turn 5 - which the game ended. I could have picked up a few more points for strategy and inspection with better play - but also framed for murder was the wrong scheme for me to pick.

Getting familiar with the system now, fun times!